Why It’s So Important To Live Your Passion 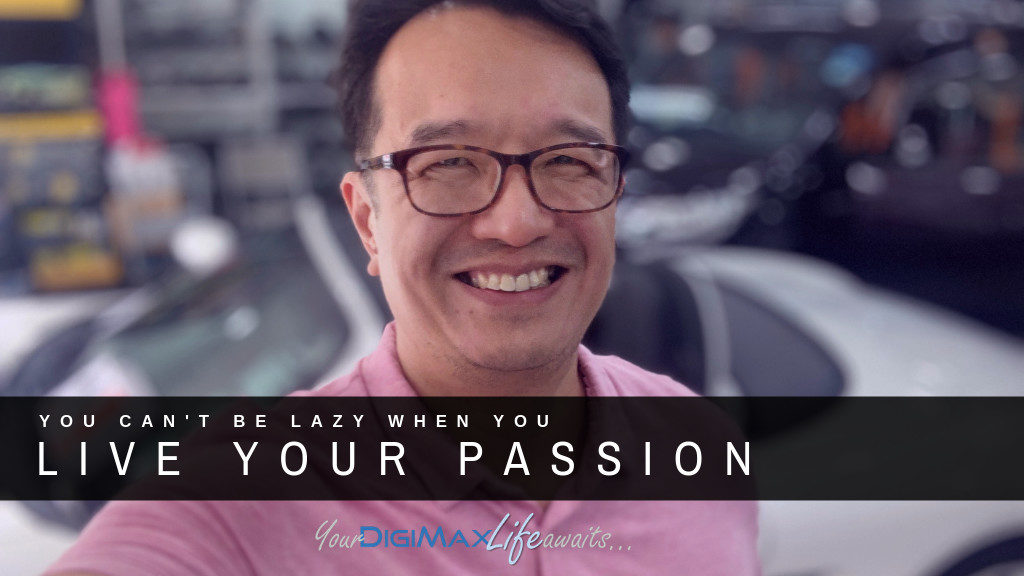 Laziness isn’t doing nothing. Working hard without passion leads to apathy and a jaded life – basically sloth. You need to live your passion. Read more.

I’ve been told that the “internet entrepreneur lifestyle” is a lazy one. People have called it the “permanent holidayer lifestyle”, and other much more derogatory terms.

The fact is, I’m actually getting my car stereo done up today, in the middle of the week, because that’s when it’s the least crowded and I get a chance to hangout at the workshop and get things done exactly the way I want.

I’m also sat here in the workshop, writing this blog.

So I work a little differently. And that was a goal of mine which I worked hard to achieve.

I’m also hoping this article inspires you a little. Because that would be me living my passion – to show people that they have choices, they do not need to be stuck in a job or business they are no longer passionate about because they need to put food on the table.

In this day and age, there’re many other ways to put food (and more) on the table.

The gap for many of us is that we simply were not taught any of these methods – and in fact, were brought up with the idea that we needed to go to school, get a good education, and then work hard until we retire.

And if we don’t do that, society just thinks we’re lazy.

The thing is, most of us who are in the workforce today, were brought up in a traditional education environment, which was shaped by ancient classical writings.

In the 4th century, eight “evil thoughts” in Greek were published. One of these was Ἀκηδία (akēdia, acedia) or dejection.

This is now more commonly known as Sloth.

Sloth was adopted as one of the 7 Deadly Sins by Christianity, appears as one of the 5 Hindrances in Buddhism, has even made its mark in Eastern Orthodoxy, and clinical Psychology!

Psychologist Dr. William Backus pointed out the similarities between Sloth and depression, and I’ll explain more later, but…

Our modern culture has unfortunately simplified Sloth to laziness, and this has been popularized by movies such as SE7EN, which starred Brad Pitt and Morgan Freeman.

But Sloth is not laziness. It’s probably better translated as apathy, or living without care or passion.

Why am I writing all of this?

Partly in defence of myself, spending a day in the middle of the week working on my car stereo. 😄

But more to tell you that there is nothing wrong with wanting more in life than to sit behind a desk until you retire.

Society will tell you it’s not normal. It’s lazy, perhaps even slothful. That’s because society’s thinking has been shaped by traditional education, which has perpetuated and oversimplified definition of sloth.

If you’re not passionate about living or working the way you are, then find work that you’re passionate about, otherwise dejection and even depression are not that far away.

Answering to a boss or clients you do not respect, who are asking you to do things you do not agree with, just to earn a pay check, will lead you down the road to apathy, and eventually depression.

That’s completely normal. So, if that’s you, don’t beat yourself up for it.

I’ve been there too. In 20 years of corporate law, I didn’t always agree with every position my clients or bosses instructed me to take. And when it was serious I stood up, but worried about my pay check. And if it wasn’t, I would let it go.

But you start to build a shell, and to not care, ie apathy, and if that keeps going on, it’s not hard to see how depression can be just around the corner.

Conversely, living a life where you’re passionate about what you do, or at least have the time to pursue your passions, to serve as a volunteer without needing to worry about that next pay check, is the exact opposite of Sloth.

As I said in a really short post a couple of days back, passion is the one thing that makes the difference between frustration and fulfilment. Even if you’re doing exactly the same thing.

I shared how chopping onions could be the most frustrating thing in the world, or if you’re like me and passionate about cooking, actually fulfilling.

And it’s exactly the same for these guys working on my car stereo.

They’re the best in the industry, award winning, because they’re passionate about what they do.

The beauty of the online economy, is that average people can learn to pursue their passions. There’s absolutely no excuse to be living without passion anymore.

So the question is, will you pursue your passion?