What we can learn from Freddie Mercury 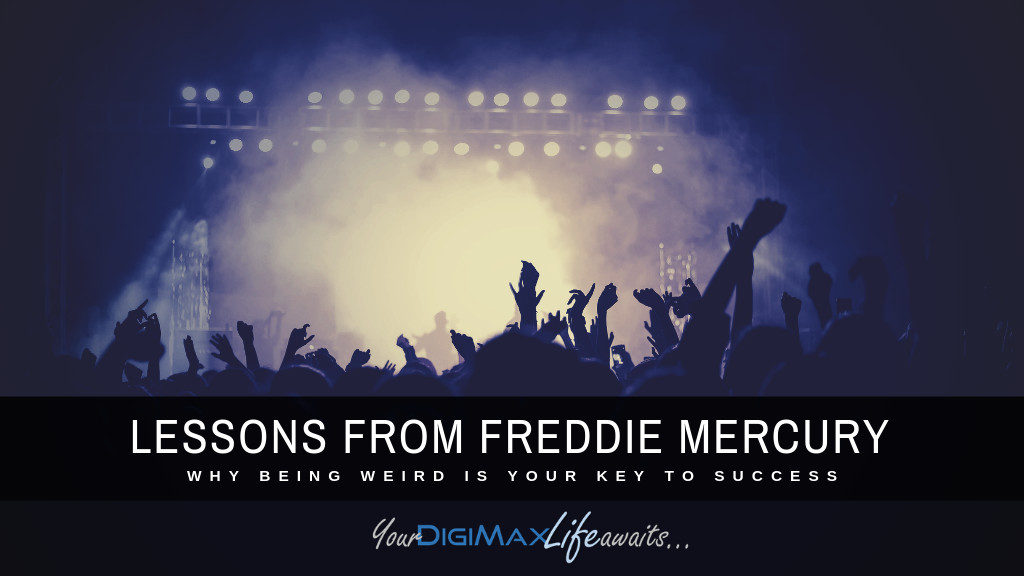 Watching this movie on how Freddie Mercury led iconic band Queen to success, taught me many lessons. How being weird was key to his success and much more.

I’ve gotten lots of feedback asking me to elaborate on an email on Wabi Sabi that I sent out a few days ago.

(If you’re not acquainted with that concept, Wabi Sabi is a Japanese philosophy of seeing beauty in imperfection.)

This scene from a movie that I was watching on the flight back home to Singapore from my recent trip to Tokyo might help.

It was a biopic on British rock band, Queen, entitled “Bohemian Rhapsody”.

There’s a scene where Freddie Mercury, Queen’s iconic lead singer, approaches Brian May and Roger Taylor (other would be members of Queen).

Their band Smile had just lost their lead singer, and Freddie Mercury offers himself as their new lead singer.  They reply, “not with those teeth, mate”.

He replies, “I was born with four additional incisors. More space in my mouth means more range”, and proceeds to sing for them, and land the role that gave him global fame.

He would never fix his teeth, because he saw them as his greatest asset in contributing to his voice.

There are so many other lessons in that movie, and I’ll just pick up a few that are relevant to this article.

In those days, there weren’t many non-Caucasians in the western popular music scene.  He could have easily given himself an excuse not to move towards his dream.

On top of that, it appears his traditional family wanted him to be in a “traditional” job.

Taking the tooth alignment problem as an example – while it is easy to dismiss that as an imagined problem, it could be very real in the looks dominated world of show business.

Whether we think the obstacles that faced Freddie Mercury were real or imagined, I’m sure we can all agree that he focused singly on achieving his dream, and not someone else’s.

Because of that, his determination really shone through.  Even after the band was formed, he got them their record deal, their first international tour, etc.

He was going after his dream.

While doing that, he was taking charge of his destiny.

Back to the teeth…

What excuses are we giving ourselves not to succeed?

When I first started my online business, I told myself that middle aged, overweight Asians won’t do well on Youtube.

Are you too busy?  Too old?  Too young?  Not computer literate?  Too Asian?  Not Asian enough?  Too overweight?  Not educated enough?  Too educated?  English isn’t your first language?

Whatever it is, if we decide this is our dream, anyone of those could be a strength – at a very minimum, imagine how inspiring that will be to someone else facing the same thing?

And because we always earn according to the value we put into the world, by simply starting to give value in that way, and learning how we can monetise that with our training, we can start earning, because we’ve put value into the world.

Are we living someone else’s dreams or chasing their goals?

When was the last time you asked yourself what was truly important for you to achieve in your lifetime?  Are you working towards that?

It’s easy to follow the path society has chosen for us.  Life gets a lot more challenging when you’re following your dreams.  You’re no longer doing what people expect you to be doing.

I should have stayed in my respectable corporate law career.  It would cost my soul, but I will not be challenged by people around me.

Which is the higher cost?

That’s something only you can decide.

So don’t be fooled by online marketeers telling you that it’s easy, you’ll be living this dream lifestyle.

The truth is making money online takes work.  And that’s made harder because you’re no longer on the path society expects.

The first 6 months for me were tough.  I made no money.  To make things worse, there was this strong expectation from those around me that I should have been in a job.

In the 6th month, I replaced my corporate law income, and went on to make another 500k in commissions in the next 12 months.

Was it worth the challenges?  It was for me.  That’s my reality I had to live with.

You have to live your reality, and that means only you can decide if it’s worthwhile for you.